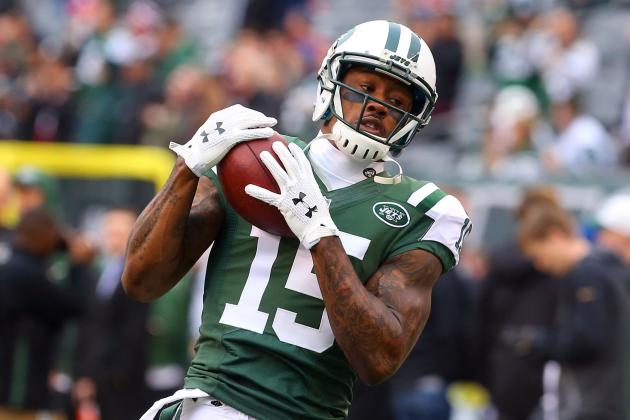 New York’s powerful running back Chris Ivory had 59 rushing yards outside the tackles this past Sunday, per ESPN Stats & Info, his most during the last two seasons. The Cowboys rank 23rd against opposing backfields, allowing 100.4 yards per game and a generous 4.2 yards per rush on the season. On an offense that prefers to trend run-heavy, Ivory is going to absolutely destroy Dallas’s stop unit tonight. Powell caught a career-high 8 passes in last Sunday’s comeback win over the Giants while tying Brandon Marshall for a team-high 13 targets. Game flow helped him overall, but Powell got involved early. He led the team with 6 first-half targets, catching 4 of them for 56 yards. That included a nice 25-yard catch-and-run TD.

Two quick Giants scores after that, however, found the “home” team leading by 10 heading into the half and the Jets playing catch-up the rest of the way. It marked the 2nd time in the past 3 games that Powell out-snapped Chris Ivory — by 13 vs. the Giants and 24 at Houston — with the other coming in a loss to the Texans. It was also his 3rd game of 5+ receptions among his past 5 healthy games. The earliest occasion also came in a loss, to the Eagles in Week 3.

The Cowboys haven’t allowed an opposing passer to top 220 yards since Week 10. But Fitzpatrick is even hotter entering this one, reaching 2 TDs in 6 of his last 7 match-ups and in 8 of his last 9. Playing with 1 of the game’s top WR duos, Fitz remains a viable Quarterback that gets the job done! Brandon Marshall ranks fifth in total yards, confirming his status as a surefire WR1. Much like his consistent teammate Eric Decker, Marshall offers one of the most bankable usage and production patterns in all of football.

The Cowboys’ conservative offense likes to play keep-away from opposing passing games, but the sheer consistency of Marshall’s scoring pattern should win out. With a touchdown in all but three starts, Eric Decker is one of the most consistently productive options at the position. The Cowboys have allowed the seventh-fewest yards to receivers this season, but have yet to face the Jets’ talented tandem of big wide outs.

Dallas’s helmsman Matt Cassel has been mostly awful, throwing more INTs than TDs with a 6.3 YPA and sub-60-percent completion rate while steering the Cowboys to a 1-5 record since he took over under center. Still, Garrett and the coaching staff feel that the veteran gives them a better chance to win than backup Kellen Moore, who hasn’t thrown a snap in the NFL in four seasons.

That could change once the team is officially eliminated from the postseason and the focus shifts to 2016, however. Darren McFadden woke up from a two-week slump to chip in 111 yards on just nine carries in Week 14. However, he failed to top 59 combined yards in his prior two outings and has scored just once over his past seven games. With a tilt versus a Jets defense that has allowed just one running back score all season long and limited yards to running backs in their past three outings, why play?

Call up the world’s best offshore sportsbook today or log in to your account now to get this great play in before it’s too late.