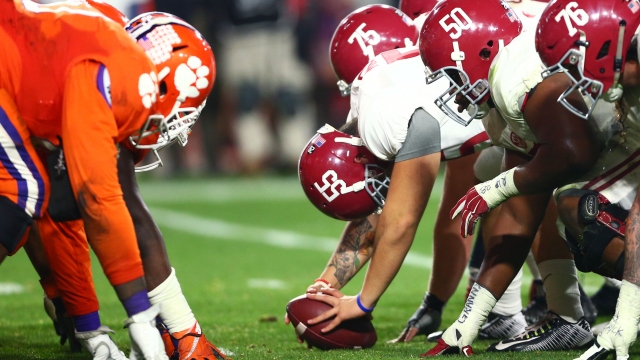 August comes with heightened expectations with the preseason Top 25 Poll for college football arriving.  Thank you for checking back in with us here at APEX Football Betting.  The usual suspects have perched themselves atop the football world.  Alabama and Clemson expect nothing less than a repeat appearance in the final four playoff system.  After them, the waters get muddier with even a team at number ten getting a first place vote.  Find out the surprises and one of our sources for a wealth of information in the upcoming season at APEX Football.

Here we have a mild shocker with the Vols getting a first place vote and being at #10.  64 coaches are consulted in this poll with their ballots being secret every week until the final poll.  So who had the guts to go with Tennessee?  Well it was not their coach as he does not have a vote.  It might be a smart move as they are in the weaker East division.  Winner of the SEC championship would almost get cart blance for the final four.  Vols can drop one in the season, win the championship, and catapult that to greatness.

Here we have Houston at #13.  Poised to play spoiler for the playoffs.  They have Oklahoma right out of the gate but the Cougar offense can keep up with anyone.  This is where consulting and reading a site like Ask the Bookie is invaluable.  Not only all the standard news feeds in college football but an assembly of experienced handicappers that see most of the angles.  What do they think about this poll?  Go there right now and discover the many treasures they have for yourself.

Australia opens up the season in which Cal and Hawaii will play down under.  APEX Football Betting will be there with you every step of the way.  Utilizing the resources at Americas Bookie, we can bet and translate our superior sports wisdom into cold hard cash.  Thanks for checking in and we will see you next time here at APEX Football.