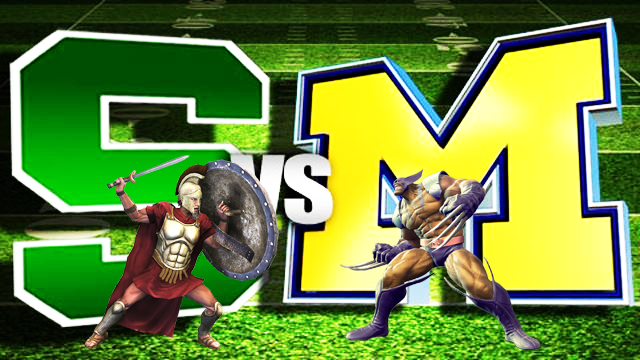 Michigan State is 23-9 (.719) in Big Ten road games under MSU head coach Mark Dantonio, including a school-record 10-game winning streak and a 17-3 record (.850) since 2010. Dantonio has won at least one road game at every Big Ten stadium (including Rutgers, who joined the Big Ten in 2014 and where MSU has
yet to play a conference game). Michigan State’s 10-game road Big Ten winning streak, dating back to 2012, is the longest in school history, besting the previous record of eight straight set in 1965-67 and 1988-90. It’s also the third-longest active conference road winning streak in the FBS (Ohio State: 13; Florida State: 13).

Fifth-year senior quarterback Connor Cook earned his 28th career win with the victory over Purdue, making him the winningest starting quarterback in school history. He passed Spartan signal-caller Kirk Cousins school-record mark of 27 career victories for MSU. Cook owns a 28-3 record (.903) as the starter, including a 17-1 (.944) mark against Big Ten opponents. The 28 wins are tied for the most of any active starting quarterback in the NCAA FBS, along with Stanford’s Kevin Hogan, while Cook’s .903 winning percentage ranks No. 1.

Out of 360 minutes played this season in 6 games, Michigan State has only trailed for one minute and eight seconds. The Spartans gave up an early first quarter touchdown to Oregon, but scored three plays and 1:08 later to tie the game at 7. In addition, the Spartans have led for nearly 282 of those 360 minutes (tied with Western Michigan for 3:49; tied with Oregon for 14:17).

The offense has been balanced through six games, with the ground game gaining 201.4 yards per contest and the air attack averaging 191.4 yards per game. Michigan has gained 1,007 rushing yards on the season; rushed 207 times for 1,007 yards and 12 touchdowns. Six different Wolverines have scored rushing touchdowns this season, led by tailback De’Veon Smith (4), quarterback Jake Rudock (2) and wide receiver Jehu Chesson (2).

In the passing game, Michigan needs 44 yards to reach 1,000 on the year; completed 89-of-152 (58.6 pct.) for 956 yards and five touchdowns. U-M has won the time of possession battle in each of the five contests this season and has 9-minute-plus advantage on the opposition (34:20 to 25:40). Michigan’s offensive line has allowed five sacks in five games; The front did not yield a sack at Utah or against UNLV and allowed one sack vs. Oregon State and two against BYU and Maryland.

The Wolverines are converting 42 percent of their third-down chances (32-of-76) and have moved the chains on 3-of-9 fourth-down opportunities. Jake Butt leads a tight end corps that includes fellow veterans A.J. Williams, Khalid Hill and Michael Jocz. The tight end corps has collected 28 passes for 359 yards and one touchdown. Butt is the team’s second-leading receiver with 19 receptions for 234 yards followed by Ian Bunting (4 for 55 yards), A.J. Williams (3 for 31 yards) and Khalid Hill (2 for 39 yards).

Michigan has lined up with the same five starters along the offensive line in each of the first five games. This group boasts 97 combined starts, with each of the five players having double-digit starts in their careers: Graham Glasgow (28), Kyle Kalis (20), Erik Magnuson (17), Mason Cole (16) and Ben Braden (16) Despite starting just two games in 2014, De’Veon Smith rushed for a team-high 519 yards on 108 carries (4.8 avg.).

He led the Wolverines with six rushing touchdowns and posted only 17 lost yards on those 108 attempt.
Michigan is ranked in the top 5 nationally in six defensive categories. The defense has pitched a shutout in back-to-back games for the first time since the 2000 season. Michigan is the first team since 2011 to hold two major conference/independent opponents under 110 yards in a game. The U-M defense is allowing just 71 yards per contest rushing and 112.6 yards passing. The Wolverines have yielded 38 points on the
season (9.5 avg.). Michigan has been stout on third down, allowing just 14 conversions in 72 attempts through three games (19%). The defense has 11 sacks and 40 TFLs through five games of action. U-M posted 10 stops behind the line of scrimmage at Utah, added seven TFLs vs. Oregon State, posted nine against UNLV, added six TFLs against BYU and posted eight at Maryland. Michigan has 17 different players with 10 or
more stops this season. Michigan has held the opposition scoreless in 14 of the last 15 quarters. The defense has yielded just seven points over the last 15 quarters.

The Bottom Line: Michigan has the 1 of the best defenses in the nation.